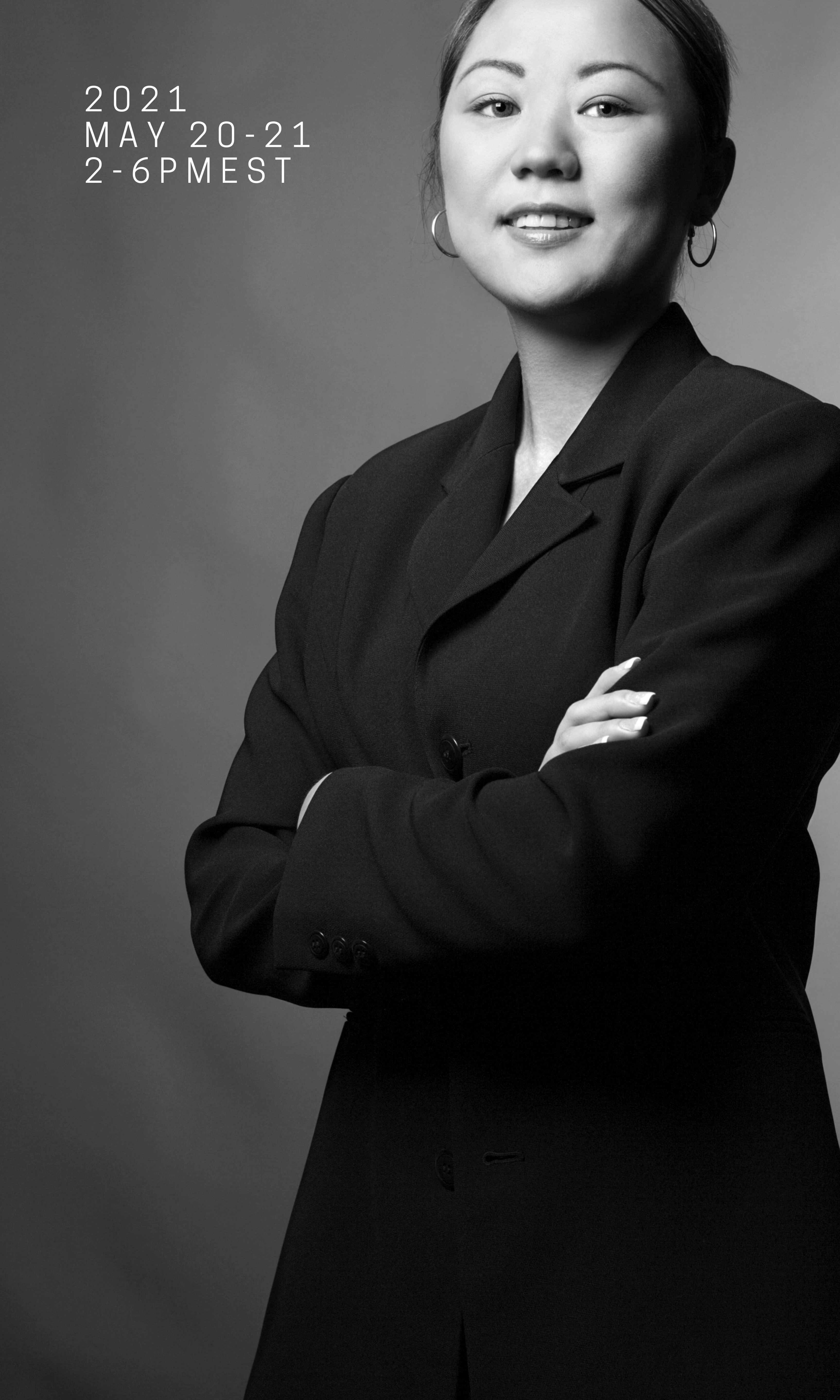 Stand with us against anti-Black and anti-Asian hate. By building cross-cultural solidarity.

Over two days interact with unique guests and experts from Black and AAPI communities across America through our interactive panels. We’ll explore anti-Black and Asian sentiments within our communities, ways to combat them and tools to build lasting solidarity.

Get to know our moderators and panelists!

Cecilia Conrad (Moderator) is CEO of Lever for Change and a Managing Director at the John D. and Catherine T. MacArthur Foundation. Previously, She served as Associate Dean of the College (2004-2007), as Vice President for Academic Affairs and Dean of the College (2009-2012), and as Acting President (Fall 2012).  From 2007-2009, she was interim Vice President and Dean of the Faculty at Scripps College.   Dr. Conrad is a member of the board of trustees of Bryn Mawr College, The Poetry Foundation, the National Academy of Social Insurance, IES, and the Sylvia Bozeman and Rhonda Hughes EDGE Foundation.  She is a trustee emerita of Muhlenberg College.

Susan H. Kamei is the author of When Can We Go Back to America? Voices of Japanese American Incarceration during World War II (Simon & Schuster, 2021), a narrative history of the wartime incarceration of 120,000 persons of Japanese ancestry, told through first-person accounts of more than 130 incarcerees. The granddaughter and daughter of incarcerated persons, Kamei was a volunteer leader in the campaign for the Civil Liberties Act of 1988 that acknowledged the wrongfulness of the incarceration and provided token reparation payments to the surviving incarcerees.

William A. (“Sandy”) Darity Jr. is the Samuel DuBois Cook Professor of Public Policy, African and African American Studies, and Economics and the director of the Samuel DuBois Cook Center on Social Equity at Duke University. Darity’s research focuses on inequality by race, class and ethnicity, stratification economics, schooling and the racial achievement gap, North-South theories of trade and development, skin shade and labor market outcomes, the economics of reparations, the Atlantic slave trade and the Industrial Revolution, the history of economics, and the social psychological effects of exposure to unemployment.

Tracy Jan covers the intersection of race and the economy for The Washington Post, a beat she launched in December 2016 that encompasses racial economic disparities, immigration, housing policy and other stories that hold businesses and politicians accountable for their decisions and promises. Her work has delved deeply into reparations for slavery, systemic racism in America, and the economic and health impact of the coronavirus pandemic on Black, Asian, Latino and immigrant communities.

Kirsten Mullen is a folklorist and the founder of Artefactual, an arts-consulting practice, and Carolina Circuit Writers, a literary consortium that brings expressive writers of color to the Carolinas. She and William A. Darity, Jr. are the authors of From Here to Equality: Reparations for Black Americans in the Twenty-first Century (University of North Carolina Press, 2020) which has received the inaugural 2021 book prize from the Association of African American Life and History and the 2020 Ragan Old North State award for nonfiction from the North Carolina Literary and Historical Association.

“Othering” in Black and Asian Cultures (May 20 3pm ET)

Ikhlas Saleem(moderator) is a writer, storyteller and digital media strategist, with a passion for religion, culture and education. Ikhlas serves as the Director of Digital Content for Education Post, a communications nonprofit focused on improving public education. In this role, she manages editorial and digital content, and produces and co-hosts Education Post’s podcast, Voices4Ed.  She also created, produces and is co-host of Identity Politics, a podcast on race, gender and Muslims in America.

Themis is known for his YouTube channel “Themis & Thoth” with an accompanying blog by the same name, Themis engages in political and cultural commentary. Themis studied Political Science, International Relations, and Sociology at university in Atlanta Georgia. Later he went to China for graduate school where he studied international and Chinese Law. Themis further continued his education in D.C. at Georgetown Law  to study for his J.D., upon completion took and passed the N.Y Bar.

Roseann Liu is Assistant Professor of Education Studies at Wesleyan University. She engages broad audiences through producing short films and writing op-eds that have been featured in Colorlines, The Philadelphia Inquirer, and Hechinger Report. Dr. Liu received her Ph.D. from the University of Pennsylvania, earning a joint degree in education and anthropology. Drawing from critical race and abolitionist frameworks, Liu teaches and researches structural inequalities in education, including its effects on communities of color and the organizing strategies used to enact change.

Ashlee Mitchell is a Gen-Z writer with a focus on Black and Korean pop culture. Her work can be found in publications like Teen Vogue, GRAMMY.com, MTV News, and Dazed. She is also a Communications student at Northwestern University with a concentration in African-American Studies.

Ashley Griffin also known as “Multifacetedacg” is a diverse content creator. She specializes in Hallyu Wave entertainment, with an emphasis on K-pop and music production commentary.

Boafoa Offei -Darko is a television writer based in Los Angeles, California. Born and raised in PG County, Maryland she enjoys writing about Black/African Diasporan women exploring sex and intimacy. She has worked on shows such as Queen Sugar, David Makes Man, and For the People. She currently is a staff writer on Freeform’s Good Trouble.

Dr.Kiona is an Asian American data activist, multi-media educator, and filmmaker. She runs the digital educational travel platform called How Not To Travel Like A Basic Bitch and the spin-off podcast How Not To Travel which has hit #1 in 13 countries. Dr. Kiona is currently working on a documentary called Barrio Chino documenting the contributions of Chinese Cubans.

Sampson McCormick  is one of the most in demand voices of diversity in comedy for two decades. He has headlined venues including The National Museum of African American History and Culture and Hollywood Improv. He’s appeared on BET, TV One, VICELAND, FOX Soul and the Amazon Prime film “Love The One You’re With” (2021)

Tiara Mack is a newly elected senator who identifies as a Black, queer, formerly low income, Ivy League educated activist and educator. Starting their work in activism, teaching sexual health education in Providence public schools, Mack now works as a youth organizer, empowering young people to engage in local and national social issues. They currently serve on the board of Women’s Health and Education Fund (WHEF), an abortion fund in Rhode Island.

Vanessa Siverls is the Founder & CEO of BUPeriod P.B.C, an early-stage startup in femtech, that provides innovative menstrual health products and services for girls, women and all who menstruate who may be at risk for heavy flow causing iron deficiency anemia. Siverls also volunteers her time and business services for amazing and phenomenal non-profit teams of vibrant young people: We Build Black, Black Girls Code, FlowTech4Girls, Life Project 4 Youth and Technovation.

Rielle Jones (moderator) is the Founder of Black America Summit and Rielle Events, LLC. She graduated from Wellesley College with a Bachelors of Arts in International Relations and Sociology. Mandarin is her second language. Her focus of study was cultural diplomacy, Sino-African relations and diplomacy.

Kaden Mohamed (Moderator) serves as Positively Partners’ Client and Community Impact Manager acting as a liaison between our organization, clients, and communities. Through a lens of intersectionality and equity, he helps to foster and strengthen authentic partnerships and relationships with clients and provides project management, content delivery, training, and facilitation support. Kaden has participated in numerous panels, has been interviewed about trans issues and rights by the New York Times, WBUR, the Rainbow Times, The Boston Sunday Review, and TBF News, and was featured in Spirit magazine’s 2017 Young Trailblazers list for activists under 30.

Sophia Mo hailing from Boston, Massachusetts, Sophia Mo earned her undergraduate degree in French and International Relations at Wellesley College. In 2016, she joined the PhD program in French and Comparative Literature. Outside of her academic work, Sophia is also an active organizer for the Graduate Workers of Columbia union. Through the union, she and her colleagues advocate for institutional changes that are anti-racist, abolitionist, and feminist.

Ranier Maningding is the writer behind The Love Life of an Asian Guy. He is also the founder and Chief Brand Officer at LLAG Media, an Branding and Content Marketing Agency for POC Artists, Activists, and Entrepreneurs.

Steph Graham is a relationship-driven finance and management professional who thrives in an entrepreneurial environment, making a strong business impact. Demonstrated history of process improvement and utilizing ingenuity to problem solve. Constantly cultivating leadership skills in professional and community team environments as a member of Uber’s Strategic Finance team.

Thomas Stevenson-Shannon earned his undergraduate degree in Chinese Language(Mandarin) and American Studies from Oberlin College and has a Master of Public Administration & Certificate in Chinese Studies from Middlebury Institute of International Studies. Thomas has studied, taught and worked in a variety of locations in China including Běijīng, Qīngdǎo and Xī’ān. Currently, he is assistant director of Study Abroad at the University of Cincinnati.

Gold  Manning attended undergrad at Wellesley College and graduated in 2014 with a degree in education and sustainability. They’ve spent the past five years growing fruits, farming fish and educating youth. Currently they manage the ECOmmerce department for an Albertsons company retailer. They’ve started a tutoring business and are working to expand the breadth of content they can provide to empower the youth they partner with. As a non binary trans masculine individual my masculinity is something I’m aware of even if I’m not thinking of it because everyone around me is.

Auw Sheen (moderator) obtained their MSW from KU Spring 2021. Sheen is also a Youth Advocate at the youth shelter, Synergy House and has played a role as a volunteer and intern at the Kansas Suicide Prevention headquarters.

Kevin Ma born and raised in Boston’s Chinatown, Kevin studied Business Management at Boston College as a Bill and Melinda Gates Millennium Scholar. Kevin seeks to deconstruct and reimagine professional spaces to make them more accessible for marginalized communities. His advocacy work has been recognized by the MAIP community, where he was named MAIPer to Watch. Today, he is a Strategist at BBH where he provides effective solutions to his tech and entertainment clients without ever compromising creative excellence.

Amanda Robinson founded Real Live Connection (RLC), a local non-profit, whose mission is to provide an all-inclusive safe space to educate, develop, and connect youth. In addition to standing by this mission, RLC host various events and programs for youth to connect with not only one another but to community organizations that are able to help them reach success. Some of these include: Teen Pride, Youth Day of Remembrance: Celebration of Life,  and Cup of Confidence. Amanda currently serves the community as a Board Committee Member for: the Alan Ross Pride Parade, Family Pride Zone, and NTARuPT. She has been the recipient of the 2015 Ambassadors of Justice Award.

William Chin is a proud DMV native, raised in Prince George’s County Maryland. After obtaining his degree in City Planning from MIT, he has spent the last 10 years building a career in the community development industry, He is a licensed realtor in Maryland and DC. William’s professional and volunteer experience includes affordable housing development, homelessness prevention, community organizing & engagement, as well as housing policy research. In 2020, he was honored with a Public Service Award.